What more could I say than this?

That bright solitary shooter lifted my mood in the way shooting stars do, and it helped me finish a tough run with unexpected oomph.  It also reminded me that the Geminid Meteor Shower is this week, Thursday and Friday.  I’ll be out there watching, bundled up against the cold, mug of hot chocolate in hand, perhaps something harder.  I’ll take the quiet time as a chance to look at the past year.

She did not believe that things could remain the same in different places, and since the portion of her life that lay behind her had been bad, no doubt that which remained to be lived would be better.

If you know much about Emma Bovary, you know things didn’t turn out to be better for her.  But I’m going to ignore her end for now and think about her hope instead, especially as the new year approaches. For me, 2012 was manic.  Heart-pumping highs, heart-breaking lows.  As 2013 gets ready to chime in, remnants of the highs and lows linger. It’s going to be a year of decisions and changes. I’m not a fan of decisions and changes.  I like static; it’s easier.  But new years hold the promise of new hope, new oomph, new excitement. Even after welcoming in 50 of them, I still feel that way.

The February 2012 issue of O, The Oprah Magazine includes an A to Z feature titled “Express Yourself,” an alphabetical roundup of possibilities for showing the world who you are. Listed under Q for “Quiet” is … drumroll, please. The Silent Writers Collective!

Thank you to Rachel Bertsche for including us and writing such a nice piece. If you haven’t seen the full article, it’s definitely worth reading. And while you’re at the bookstore, pick up Rachel’s new book, MWF Seeking BFF, her hilarious and touching memoir about the tough, sometimes awkward, and ultimately rewarding experience of making new friends as an adult.

This week’s Once A Book project comes from the blog Atypical Type A by Alicia Parsons.

Her tutorial, Make a vintage book vase, is easy to follow, requires only basic craft supplies, and makes a vase that is lovely to look at, but it is just for looks.  To make a vase that holds water and a stem or two, use a book with a spine wide enough to wrap around a small test tube or florist water tube.  Insert the tube before adhering the end pages in step 6.

As always, with Once A Book projects, if you try it, send a picture and I’ll post it here.

Resources: Once A Book, Atypical Type A, The Daily Post.

Of all the books on my must read list, classics cause me the most guilt.  As a writer, I know I should read them, but it’s hard to resist the temptation of the latest literary sensation.  I’d much rather read “A Visit from the Good Squad” than say “War & Peace.”  I know it’s to my benefit to read them both, but who’s got that kind of time?

I’ve just discovered a website that can help.  Better Book Titles is a blog for people who don’t have time to read. Website creator Dan Wilbur says, “I will cut through all the cryptic crap, and give you the meat of the story in one condensed image. Now you can read the greatest literary works of all time in mere seconds!”

It’s a tongue in cheek approach, but Mr. Wilbur is a comedian, so it fits. For a few good laughs and an opportunity to get caught up on some reading, visit Better Book Titles at http://betterbooktitles.com. Be forewarned, if you’re easily offended, you’d probably prefer the library.

NOTE: My apologies for the lack of links and finesse on this post.  I’m in a mad rush to catch a plane and WordPress is misbehaving.  Links, tags, etc., are not working.  I was able to trick in a few, but rather than skip a post or toss my beloved laptop out the window, I’m posting plain today. There’s more info on Better Book Titles below.  Ah, technology.

Once upon a time a popular series called Little Golden Books was published and it forever changed the way we look at children’s literature.

Many years later, a young prince came to town and forever changed the way we look at  Little Golden Books.

You see the prince was not really a prince, he was a talented and creative artist named Ryan Novelline, (perfect name for a book artist).  He saw the treasure in those Little Golden Books and began collecting discarded copies. When he gathered enough, he took the illustrations, the foil spines, and some golden thread and spun them into this magnificent gown.

The 22,000 square inch skirt is made almost entirely of illustrations and the gold foil spines make up the bodice.

Here is a closer look:

I am in awe every time I see this creation.  It’s original, beautiful, brilliant, and inspiring.  It’s also not the typical Once a Book DIY project I feature here on Saturdays.  Those projects can usually be done in an afternoon with the craft supplies you have at home.  This one is a lot more involved, but if you’re very interested in DIYing it, Mr. Novelline’s website includes a pictorial outline of his process, along with more photos of this incredible gown.

Now, if I could get one in my size, I’d definitely live happily ever after.

Resources: Ryan Novelline, Once a Book, The Daily Post.

When journalist Bill Steigerwald set out to follow John Steinbeck’s route in “Travels with Charley in Search of America,” he did it as a kind of tribute to the Pulitzer Prize-winning writer.

Fifty years after the first publication of “Travels with Charley,” Mr. Steigerwald said, “I simply wanted to go exactly where Steinbeck went in 1960, to see what he saw on the Steinbeck Highway, and then to write a book about the way America has and has not changed in the last 50 years.”

He didn’t find what he set out to find.  After nine months and more than 11,000 miles, Mr. Steigerwald conclusively determined that “Travels With Charley” is “not just full of fiction; it’s also a dishonest account of [Steinbeck’s] iconic journey and what he really thought about America.”

I first read about this in A Reality Check for Steinbeck and Charley in last Sunday’s New York Times, and I felt incredibly let down, even kind of heart-broken about it.  “Travels with Charley” meant something to me. When I first read it, I believed I was reading a true story by and about Steinbeck who wanted to see his country a final time before dying.

I knew it was written by Steinbeck, a fiction writer, and I knew some of it came off as a little too perfect to be completely true, but to find out that it’s mostly fabrication just felt wrong.

It felt so wrong I had to research further.  I never heard of Bill Steigerwald.  For all I knew he was some kind of publicity seeking conspiracy theorist who found his magic bullet in “Travels with Charley.”  After reading his blog, Travels without Charley, in particular the post announcing his trip, I knew that wasn’t the case.  His early posts are so filled with excitement about the road ahead of him, it’s hard not to be taken with the sincerity of it.  But I held on to my skepticism because I was, after all, exploring dishonesty in writing.  As I read later posts and all the details, it became clear that Mr. Steigerwald was documenting facts.  Facts, not fiction.

James Frey’s false memoir, “A Million Little Pieces” and the whole Oprah incident comes to mind, but that doesn’t begin to compare with this.  Who’s James Frey, right?

When asked about the authenticity of characters, Susan Shillinglaw, scholar in residence at the National Steinbeck Center in Salinas, California, said, “Does it really matter that much?”

Ignoring the astonishing arrogance of that response, I will volunteer an answer to the rhetorical question.  The answer is yes.  It really does matter that much.

It’s a question of trust and the integrity of words.

Steinbeck knew it, too.  He said so himself in the final words of his Nobel Prize Acceptance Speech in 1962.

“Having taken God-like power, we must seek in ourselves for the responsibility and the wisdom we once prayed some deity might have. Man himself has become our greatest hazard and our only hope. So that today, saint John the Apostle may well be paraphrased: In the end is the word, and the word is man, and the word is with man.”

Easter is less than a month away, so it’s the perfect time to share this Once a Book project for a Book Page Egg Wreath.

The end result is an elegant Easter decoration that you’ll want to leave hanging long after the jelly beans and Peeps are gone.

The full tutorial can be found at the Framed Book Page Egg Wreath.

Resources: Once A Book, lemon tree creations, The Daily Post.

How many phone books do you get a year?

How many do you use?

When we moved into this house there were eight gigantic phone books and four small ones sitting on a closet shelf.  The shelf was sagging under the weight.  Two days after our phone service was turned on, another two or three books were delivered.

I don’t know about you, but I haven’t used a phone book in years.  Everything’s online!  Maybe it’s time for those businesses trying to make a buck with their version of the Yellow Pages to rethink their business model.  Enough with the dead trees already.

On the positive side, phone books don’t have to be a complete waste.  Like any other book, they can be modified into something useful and fun.  This week’s Once A Book project turns an old phone book into a pen and pencil holder.

Chica at the ChicaAndJo.com, posted this tutorial on how to Recycle a phone book into a pen organizer. The tutorial has photos to help with the process, and although there are a lot of steps, it seems straight forward.  It’s a great way to do something useful with these dinosaurs, but if you’re feeling more ambitious (and have a lot of phone books), here’s an option. 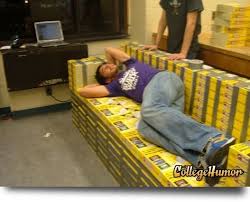 Joking aside, the phone books are not just a nuisance in the closet.  They use too many resources: paper, ink, gas for delivery, for something that most people toss directly into recycling, or worse, the trash.  To stop delivery, visit Yellow Pages Go Green.

As someone with a strong sense of wanderlust, the second line of this quote always meant something special to me.  I heard it long before I became familiar with J.R.R.Tolkien or The Lord of the Rings, but when I found out Tolkien wrote it in The Fellowship of the Ring, I smile and thought, Yeah, that makes sense.

In honor of Tolkien Reading Day 2011, I’m happy to share a few of his words.