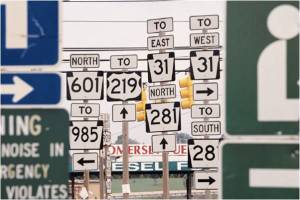 When journalist Bill Steigerwald set out to follow John Steinbeck’s route in “Travels with Charley in Search of America,” he did it as a kind of tribute to the Pulitzer Prize-winning writer.

Fifty years after the first publication of “Travels with Charley,” Mr. Steigerwald said, “I simply wanted to go exactly where Steinbeck went in 1960, to see what he saw on the Steinbeck Highway, and then to write a book about the way America has and has not changed in the last 50 years.”

He didn’t find what he set out to find.  After nine months and more than 11,000 miles, Mr. Steigerwald conclusively determined that “Travels With Charley” is “not just full of fiction; it’s also a dishonest account of [Steinbeck’s] iconic journey and what he really thought about America.”

I first read about this in A Reality Check for Steinbeck and Charley in last Sunday’s New York Times, and I felt incredibly let down, even kind of heart-broken about it.  “Travels with Charley” meant something to me. When I first read it, I believed I was reading a true story by and about Steinbeck who wanted to see his country a final time before dying.

I knew it was written by Steinbeck, a fiction writer, and I knew some of it came off as a little too perfect to be completely true, but to find out that it’s mostly fabrication just felt wrong.

It felt so wrong I had to research further.  I never heard of Bill Steigerwald.  For all I knew he was some kind of publicity seeking conspiracy theorist who found his magic bullet in “Travels with Charley.”  After reading his blog, Travels without Charley, in particular the post announcing his trip, I knew that wasn’t the case.  His early posts are so filled with excitement about the road ahead of him, it’s hard not to be taken with the sincerity of it.  But I held on to my skepticism because I was, after all, exploring dishonesty in writing.  As I read later posts and all the details, it became clear that Mr. Steigerwald was documenting facts.  Facts, not fiction.

James Frey’s false memoir, “A Million Little Pieces” and the whole Oprah incident comes to mind, but that doesn’t begin to compare with this.  Who’s James Frey, right?

When asked about the authenticity of characters, Susan Shillinglaw, scholar in residence at the National Steinbeck Center in Salinas, California, said, “Does it really matter that much?”

Ignoring the astonishing arrogance of that response, I will volunteer an answer to the rhetorical question.  The answer is yes.  It really does matter that much.

It’s a question of trust and the integrity of words.

Steinbeck knew it, too.  He said so himself in the final words of his Nobel Prize Acceptance Speech in 1962.

“Having taken God-like power, we must seek in ourselves for the responsibility and the wisdom we once prayed some deity might have. Man himself has become our greatest hazard and our only hope. So that today, saint John the Apostle may well be paraphrased: In the end is the word, and the word is man, and the word is with man.”